We asked children in Kosovo to draw corruption. This is what we got.

We asked children in Kosovo to draw corruption. This is what we got.

Beyond the headlines, political debates, and numerous research reports, there are people who are directly affected by the tight grip of corruption, people whose perspective we seldom hear about in this context; they are the children of Kosovo. Promises of fighting corruption are often followed by mental voyages to a utopic future; however, the very residents of the future, the children of today, are rarely involved on the discourse of the matter. Rather than shapers and active participants of our society, children in Kosovo are kept as passive receivers of corruption and its overreaching impact.

As a project that has been working on preventing and fighting corruption since 2012, we have tried our best to explore the ways we could reach out and engage with young people in our efforts. The Support to Anti-Corruption Efforts in Kosovo (SAEK) project seeks to strengthen institutional transparency, accountability and integrity, with the focus on empowering citizens and access to information. Thus, we considered it a perfect opportunity, to call upon the artistic talent of our youth and engage them into a drawing competition, with the aim of both raising awareness by igniting a conversation on corruption between the kids themselves, but also their teachers and parents; and reflecting on the influence of corruption in their daily lives.

An open call for youngsters (grade 6th – 12th) to submit drawings was launched. Noting young demographic composition, Kosovo is amongst the regional top users of the internet, particularly - social media. Thus, the campaign online, but also offline had a relatively large outreach, resulting in almost 650 drawings submitted from children attending 6th to 12th grades, of all ethnicities, from many municipalities and various schools. An evaluation panel comprised of: artists, anti-corruption officials and UNDP staff have selected the best drawings, which were converted into a 2018 calendar. These calendars were distributed throughout various public, private and international institutions in Kosovo. These drawings, while often gloomy – such as the ‘Corruption Street’, show the youthful capacity to satirize, the will to swing back at corruption and perhaps will serve as a reminder of what we all need to do to secure a better future for them starting with alleviating one of the most negative phenomenon in Kosovo: corruption.

Below are some of our favorite drawings from this competition. 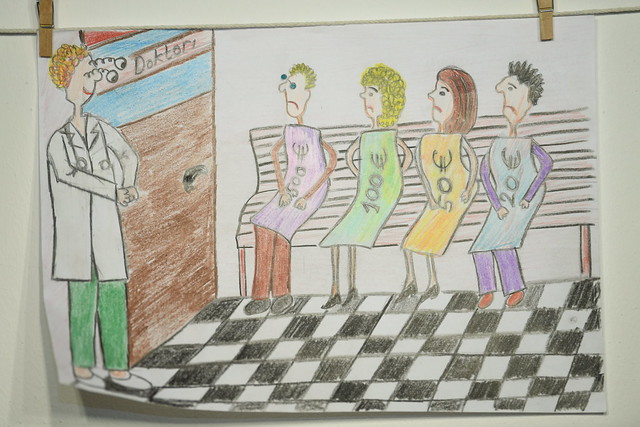