United through a Shared Love of Sports

United through a Shared Love of Sports

The gymnasium was teeming with excitement as spectators watched Zgjim Gërxhaliu position himself to make the shot that won Prishtina team first place. They had gathered for EURO Street Ball 2017, a street ball tournament that brings together young athletes from municipalities all over Kosovo and other countries in the region.

“This event is all about friendship,” says Gërxhaliu as he watches two players from the Hungarian team help his teammate up. The tournament’s organizer, Pëllumb Bajçinovci continues “it is not about winning or losing, rather engaging youth in inter- municipal and international cooperation through a shared love of sports.”

Financed by the Ministry of European Integration and implemented by UNDP, the tournament began with preliminary games in Pejë/Peć, Mitrovicë/a and Prishtinë/Priština.

On 9 May, in recognition of Europe Day, the winning teams met to face each other as well as four international European teams from Albania, Hungary, FYR of Macedonia and Slovakia. “The motto of the tournament this year is integration,” explained Bajçinovci, “trying to integrate young Kosovans into Europe through streetball.” “I think it is important that as the youngest Europeans we celebrate what Europe Day stands for,” he continued. Kosovo is Europe’s youngest nation with over 60% of its population under 25.

Gërxhaliu celebrated Prishtinë/Priština’s victory with his teammates. A retired player for Sigal Prishtina, he enjoys the teamwork involved in sports. “I’ve been training professionally since I was 11,” says Gërxhaliu, “but now I play for fun.” 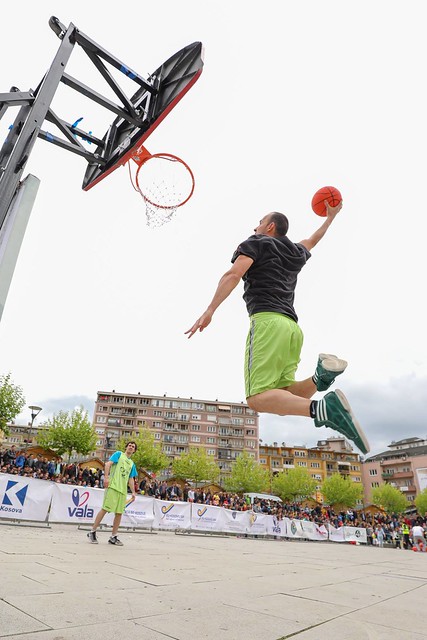